Summer is the season for many different kinds of bugs in Japan. One of those bugs are dragonflies. 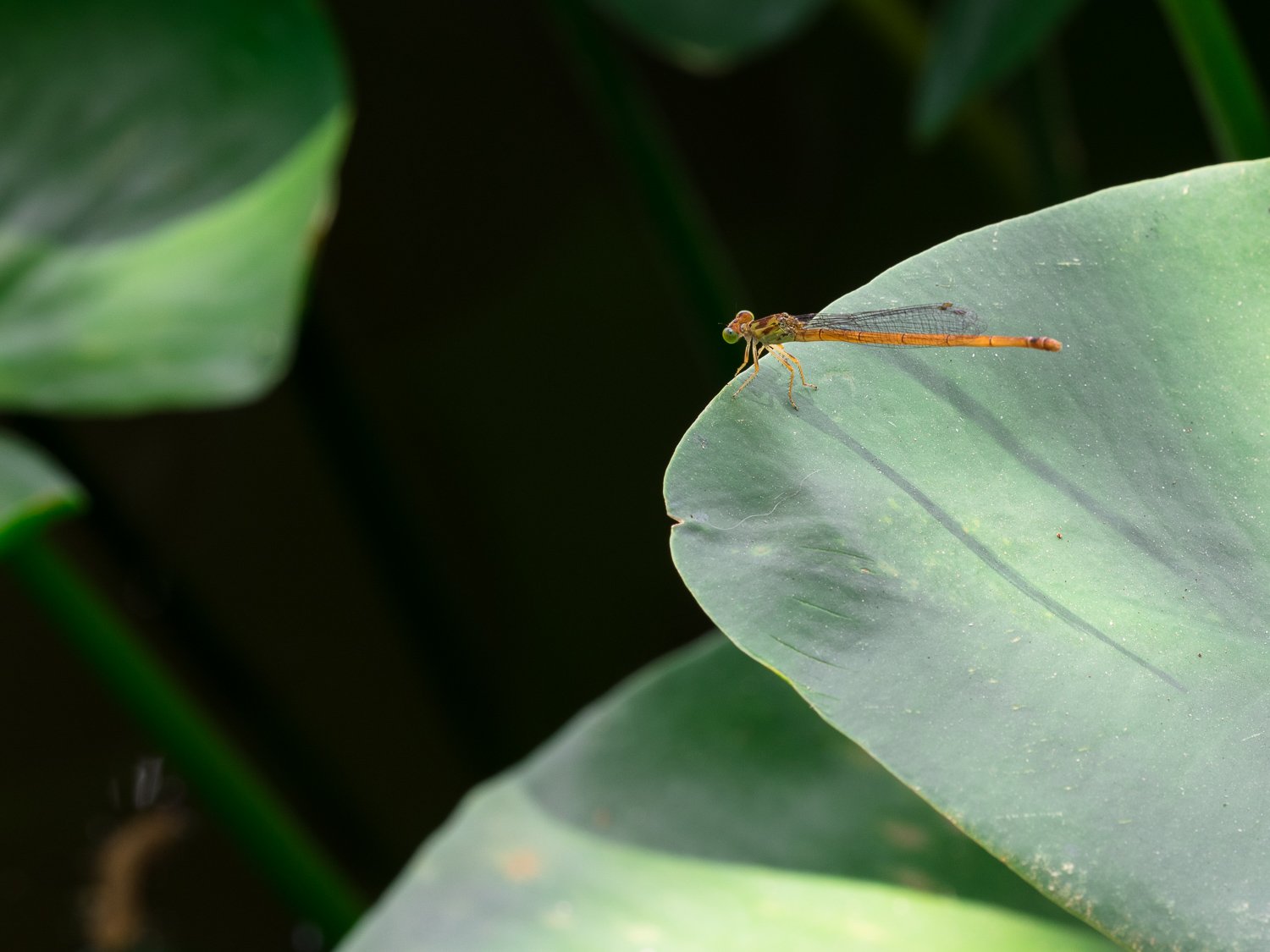 I remember when I was a kid that I knew about dragonflies, but I have no memories of seeing one in real life as a child. I’ve always liked bugs. I remember learning about how fast dragonflies are, what they eat, etc. and looking at pictures of them. Their long bodies, big wings, and big, round, compound eyes were mesmerizing. The only bugs that I had regular exposure to when I was a kid were bees, butterflies, and mosquitoes. Of course, bees and butterflies are interesting, but as a bug lover, my heart yearned for more. After moving to Japan, I’ve been able to quench my bug thirst regulary, especially in the summer time.

There is a nice park near where I live that has some signs showing about 15 or so different dragonfly species that you can see there. Sounds nice to me! I went there with my girlfriend the other day and took some pictures. 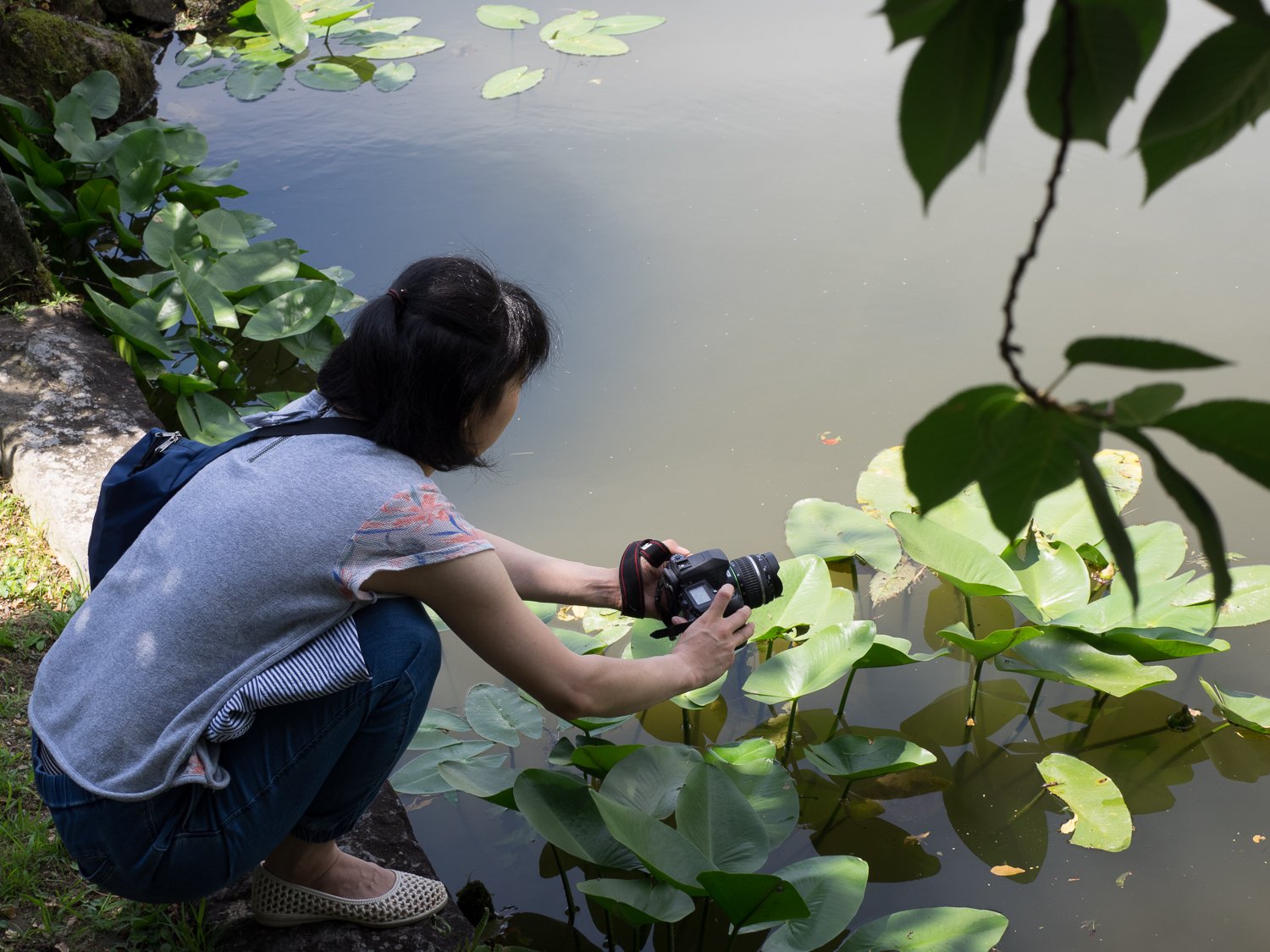 There are some challenges with dragonfly photography. My girlfriend had a fisheye lens on her Pentax, and I had my telephoto lens on my Olympus. While it’s not actually that challenging to find dragonflies that will sit still on leaves, grass, rocks, etc., when dragonflies are in flight, they are fast little buggers. Getting close is critical with a fisheye. If your dragonfly is even arm’s length away, it will be far too small in the frame. You have to get within inches of them in order to get your shot. The good news is that fisheyes are ridiculously easy to focus. Put it at f16 and pretty much everything will be in focus all the time. lol

However, the same cannot be said of a telephoto. Although I don’t have to get super close to a dragonfly to get a good shot, when zoomed in, getting dragonflies in focus while they’re flying is nearly impossible. 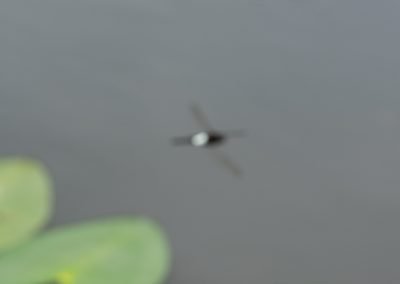 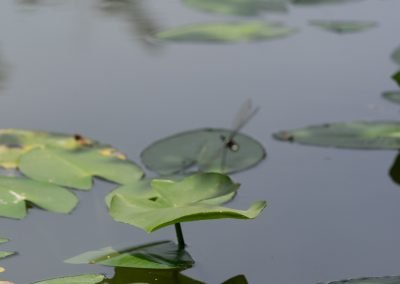 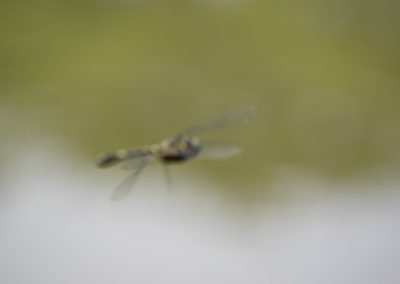 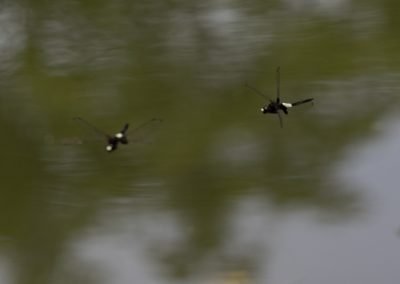 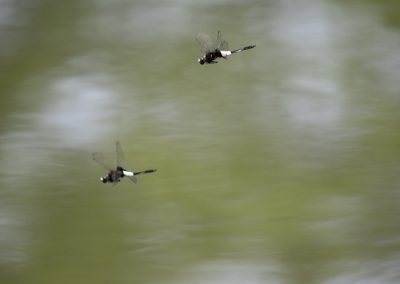 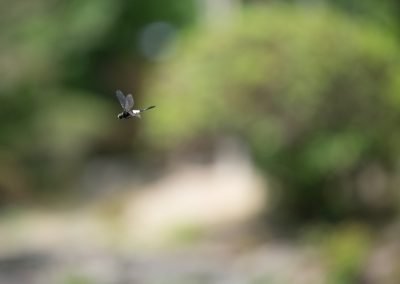 Dragonflies fly in somewhat unpredictable ways and are very fast, so even if you manage to get one in your sights, and press the shutter button to focus and then take a picture, even if the dragonfly was in focus (which is a big if), between the moment of focus and the taking of the picture, the dragonfly will almost certainly fly out of your depth of focus. Your margin of error is literally razor thin.

I also thought that manual focus would be better for getting in-flight dragonflies in focus, but that didn’t work out at all. I thought that I could set focus and then grab a shot as the dragonflies flew by. However, that plan didn’t work out at all. Depth of focus was just too thin to be useful. Next time, I plan to try using automatic focus. My feeling is that back focus will be a problem using auto focus, but it can’t be worse than manual focus. lol

Although dragonfly movement seems unpredictable, there is some predictability to dragonflies that does assist somewhat in getting a good picture. I noticed that individual dragonflies will tend to fly around in a set area. I’m not sure if they are territorial or they’re simply displaying to get mates, but either way, if you find a dragonfly, it will probably be flying around the same area for a while. If you find one in a good spot, stick around and see if you can get a good shot. That’s what I did for the blurry photos above.

The same is true of dragonflies resting on leaves or rocks. If you accidently spook one while trying to photograph it, stick around for a bit. It’ll probably return in less than a minute.

In the blurry photos above, you’ll notice that some photos have two dragonflies in the frame, and it’s those photos that seem closest to being in focus. The reason is that, when the second dragonfly arrived, the two seemed to slow down, sometimes hovering in place for brief moments. I was hopeful to get a shot during one of those moments, but they came and went quickly, so I didn’t have any time to focus.

Of course, dragonflies will take a break and sit on rocks, leaves, grass, etc. Those are your best opportunities to get good photos. They also don’t spook all that easily. You can get very intimate with them. They aren’t bothered by the shutter noise either, so you can have extended sessions with them. But, as you can imagine, there are still challenges to face even in ideal conditions. By now, you’ve noticed that focus is a big challenge in photography. Moving subjects, like jumping mudskippers or flying dragonflies, present the biggest challenge, but even getting good focus on stationary subjects can be tricky. Take this dragonfly for example. 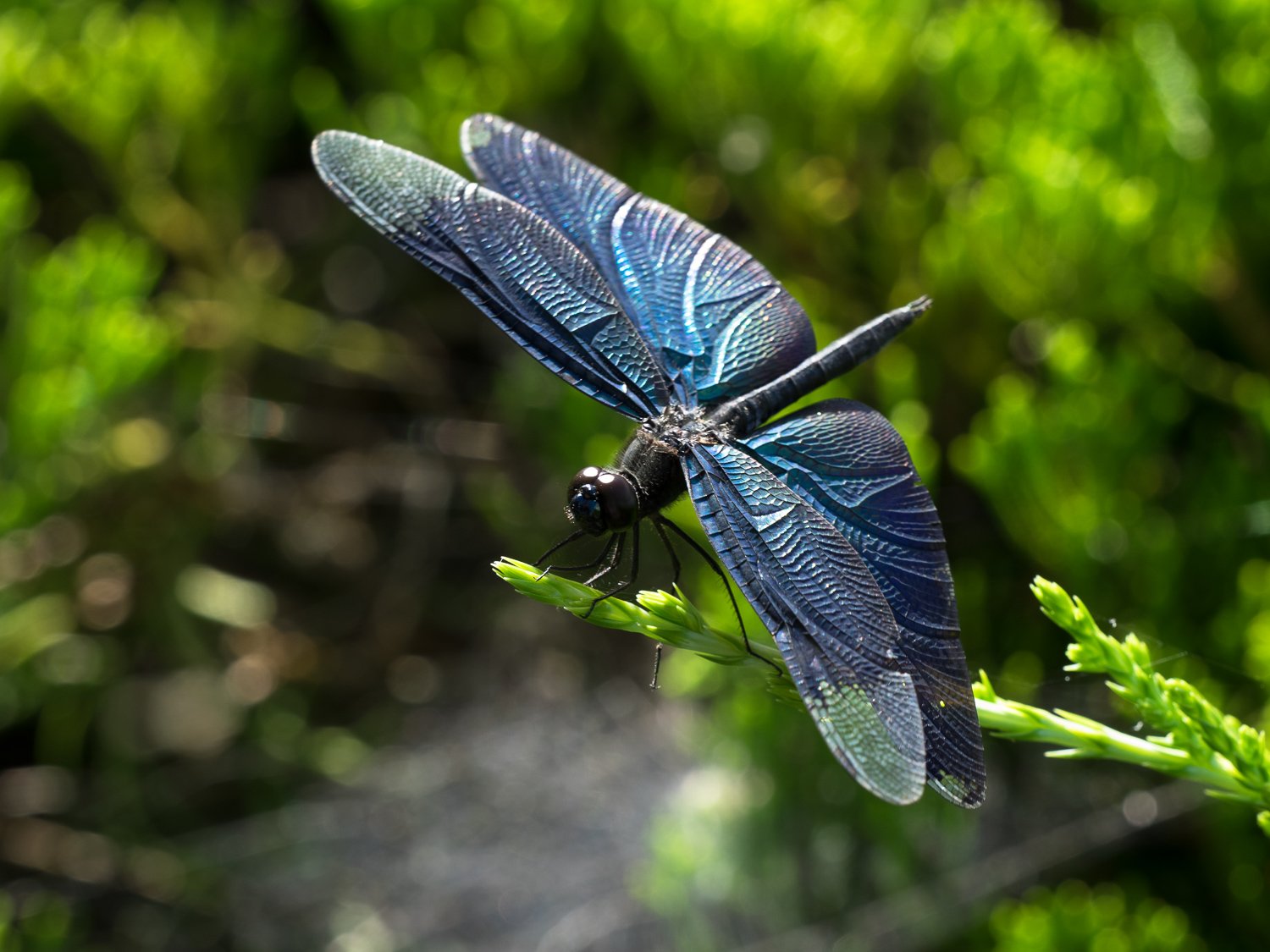 This should have been a great picture, but unfortunately, I let my guard down. I thought I could get away with a lower shutter speed (1/80), but even at f8.0, because of a little wind, the shot is blurred. Bummer, dude.

Blur from movement is one problem, but another problem is not getting enough of a subject in focus. My girlfriend took some pictures of the same dragonfly above using a fisheye, so it’ll provide a good point of comparison. 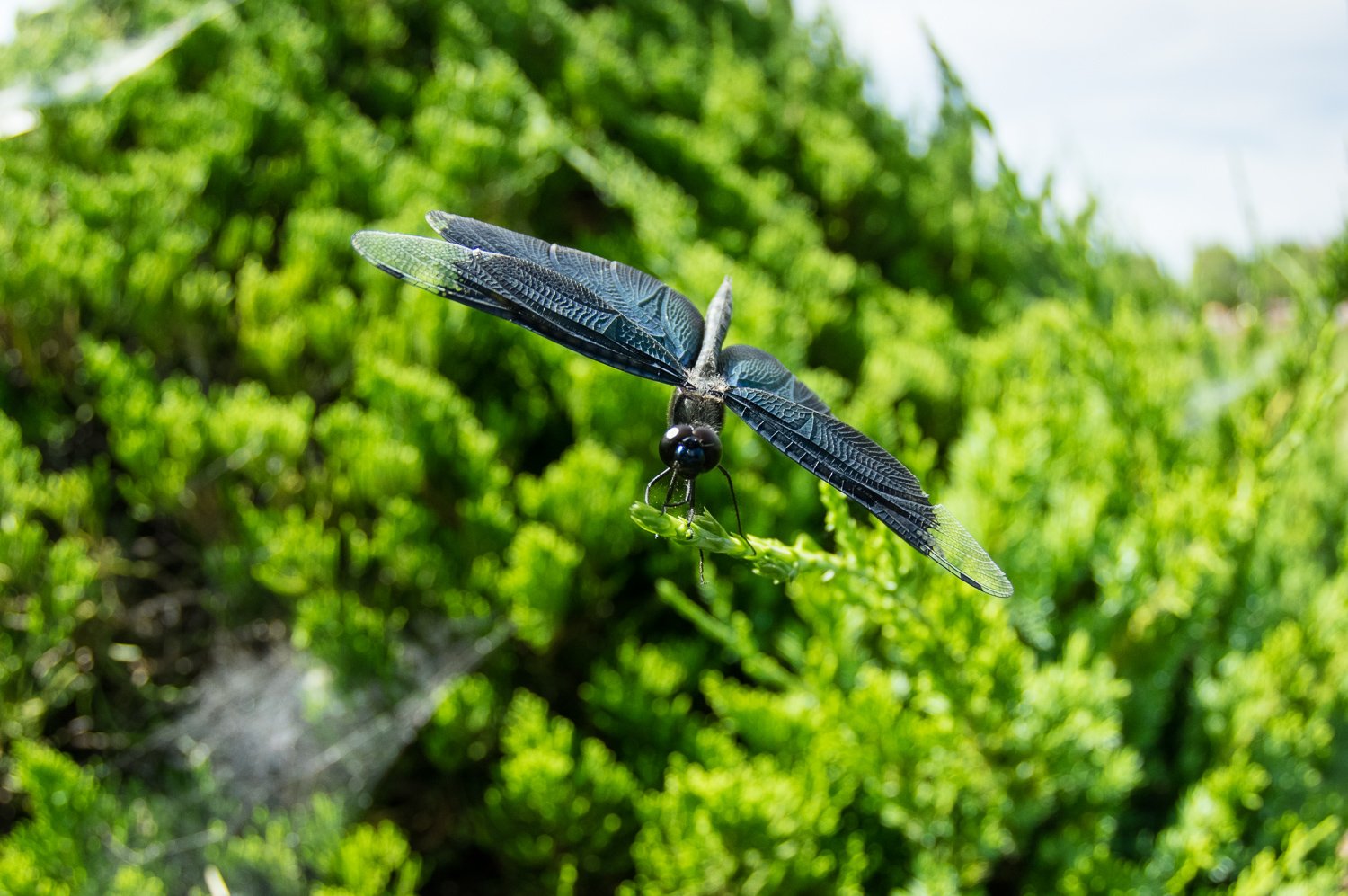 She took this shot a 1/1250, so the shutter speed was plenty fast enough. However, surprisingly, even though she was using a fisheye lens (which will have a larger depth of focus compared to my telephoto lens) at f6.3, because she was so close to the dragonfly, only part of the body is in focus. The middle part and the front wings are mostly in focus, but it’s head and back half are out of focus. Damn.

There are a few ways to overcome this focus challenge.

If you increase your aperture, you will get a larger depth of field. For example, take a look at another shot my girlfriend took. 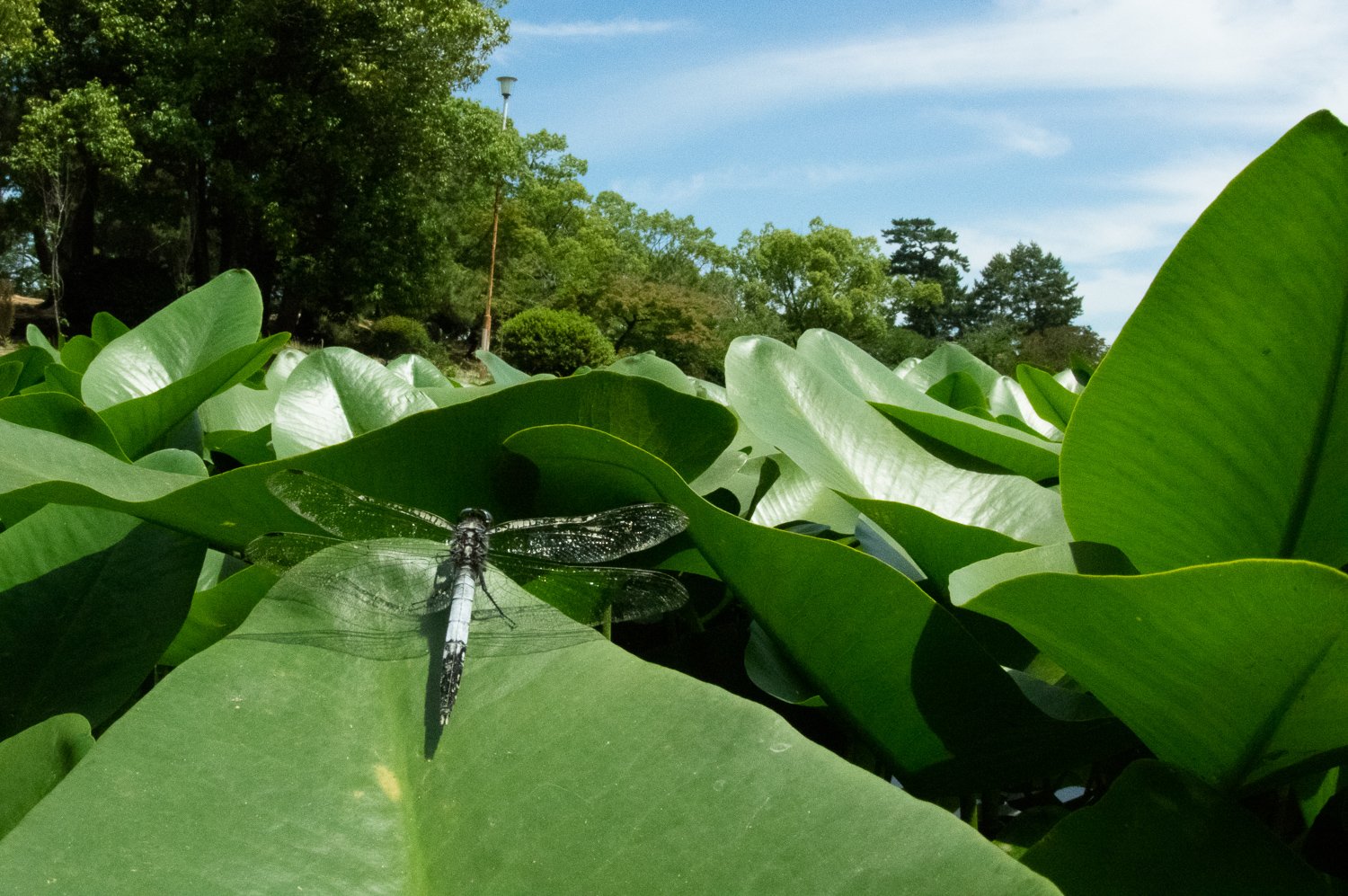 She took the photo at f29 with the fisheye. Even though she is quite close to the dragonfly, it and its environment are largely in focus. 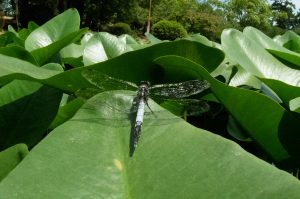 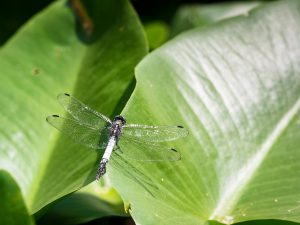 Something you probably notice is that details in the wing are more defined in the picture on the right. In fact, the dragonfly on the left seems to be in focus and out of focus at the same time. There are a couple of reason. One, the Pentax my girlfriend used doesn’t handle noise very well. At ISO 800 and above, noise becomes a serious issue. It will blur the details and reduce the color accuracy and definition. On top of that, at high apertures, light diffraction will reduce the sharpness of the details. F29 is near the upper limit of the Pentax’s maximum aperture, so it’s unsurprising that sharpness in the details has been lost to diffraction. High ISO noise and diffraction combined to drastically reduce the image quality of that photo. That’s why it’s important to know what your effective aperture range is for maximum sharpness.

The good news is that even if the image quality isn’t perfect, it’s still useable. If the photo isn’t too big, you won’t notice the lack of details anyway. For example, that image is perfectly usable for Instagram since most people will be viewing the photo with their phones.

Changing your aperture is one way to get more of a dragonfly in focus, but you can also change your composition. For example, compare these two images. 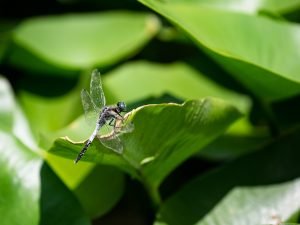 On the left, the wings of the dragonfly are largely out of focus, but on the right, they are all completely in focus. Of course, whether you like one or the other is up to you. Personally, I like the one on the left more because its wings and body aren’t very interesting, but its big, blue eyes are very interesting. However, sometimes the more interesting part of a dragonfly is its wings, like the photo near the top of the dragonfly with black and rainbow-colored wings. It’s actually the same species of dragonfly (they’re butterfly dragonflies), but depending on the angle you look at them from, the color of their wings changes. You can only see those colors from that angle, and you can only get the wings completely in focus from that angle, so the composition is perfectly appropriate for displaying those colors.

Well, they aren’t completely in focus. They are a little blurry along their edges. But, how do you fix that? With what’s called focus stacking or focus bracketing. Since this post is already too long as it is, I’ll cover focus stacking in my next post. 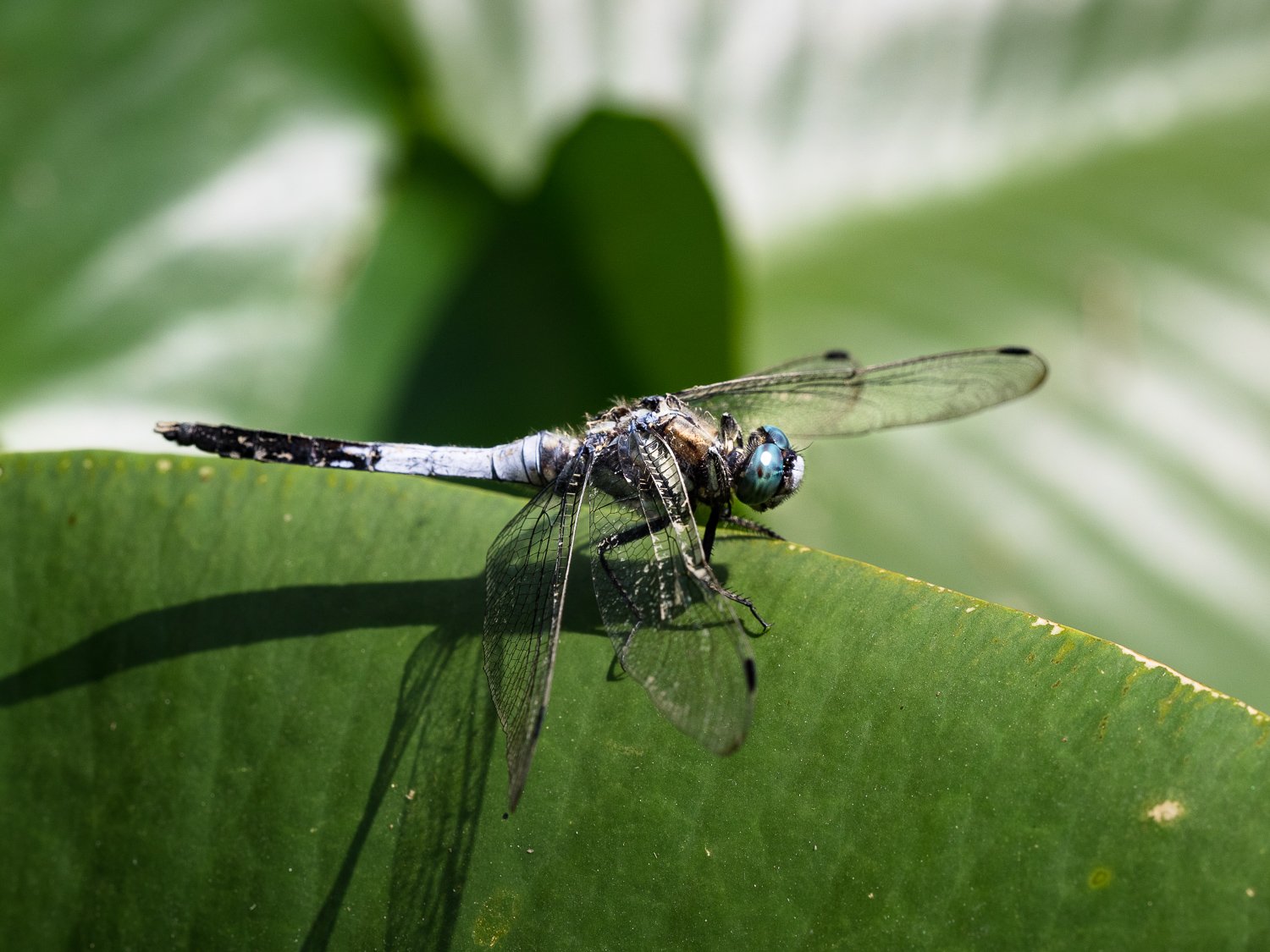