Over the weekend, I did a little night-time photography in Saga city. I wake up early in the morning when Saga is still mostly a ghost town. The only vehicles out at around 4:30 are trucks and taxis. On Sunday morning, I decided to go out and see if I could get any interesting photos at that ghostly hour. The challenge of night-time photography is that you actually want to show something, so you need some light, but light is hard to come by. You have to take what you can get. When a taxi comes to an intersection, you have to move fast to take advantage of the headlights.

But, it would be difficult to tell from the above photos that they were taken in Japan. Nothing in them screams Japan! The first one could easily be in an English speaking country. So, here’s some Japan. 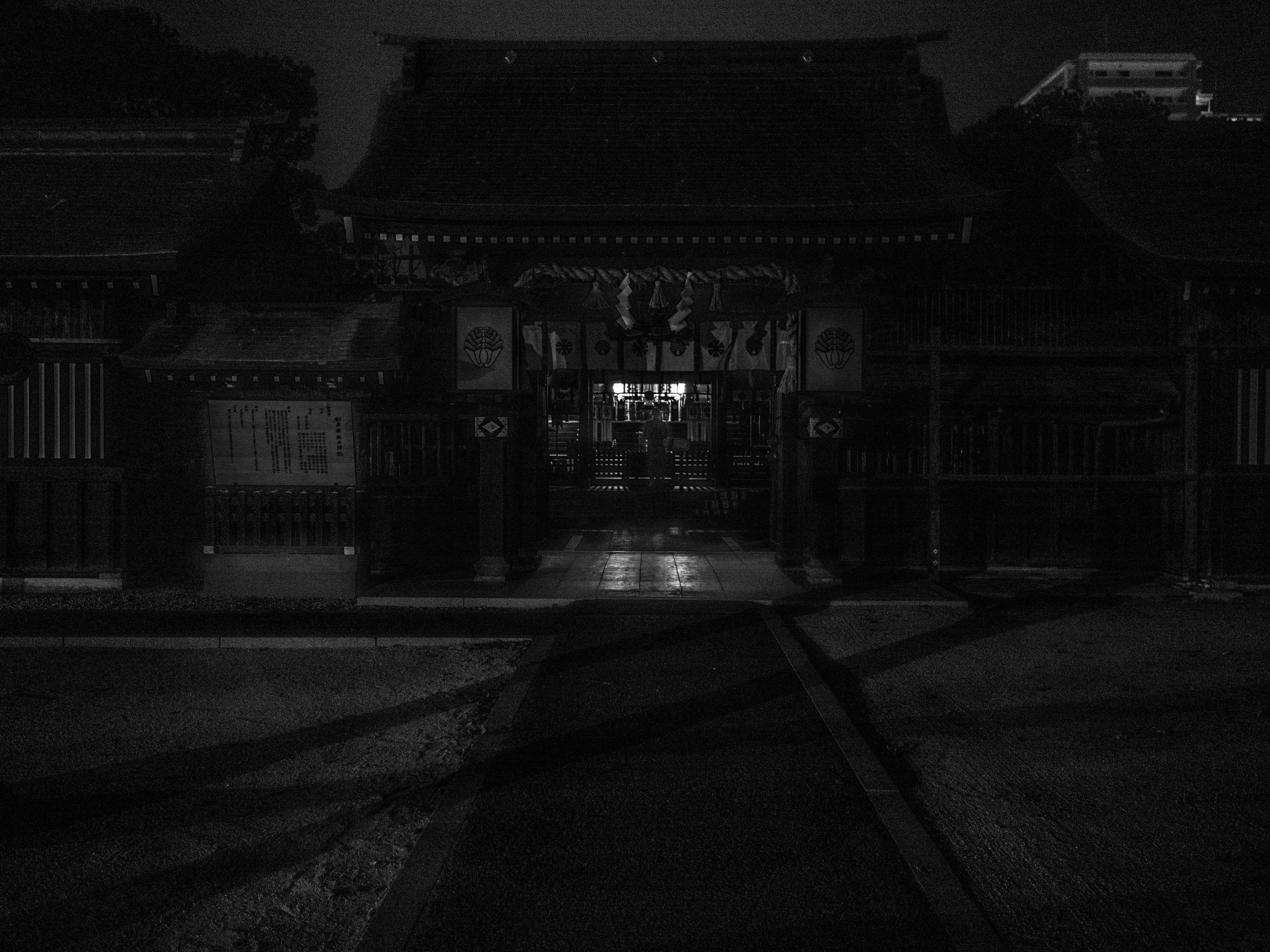 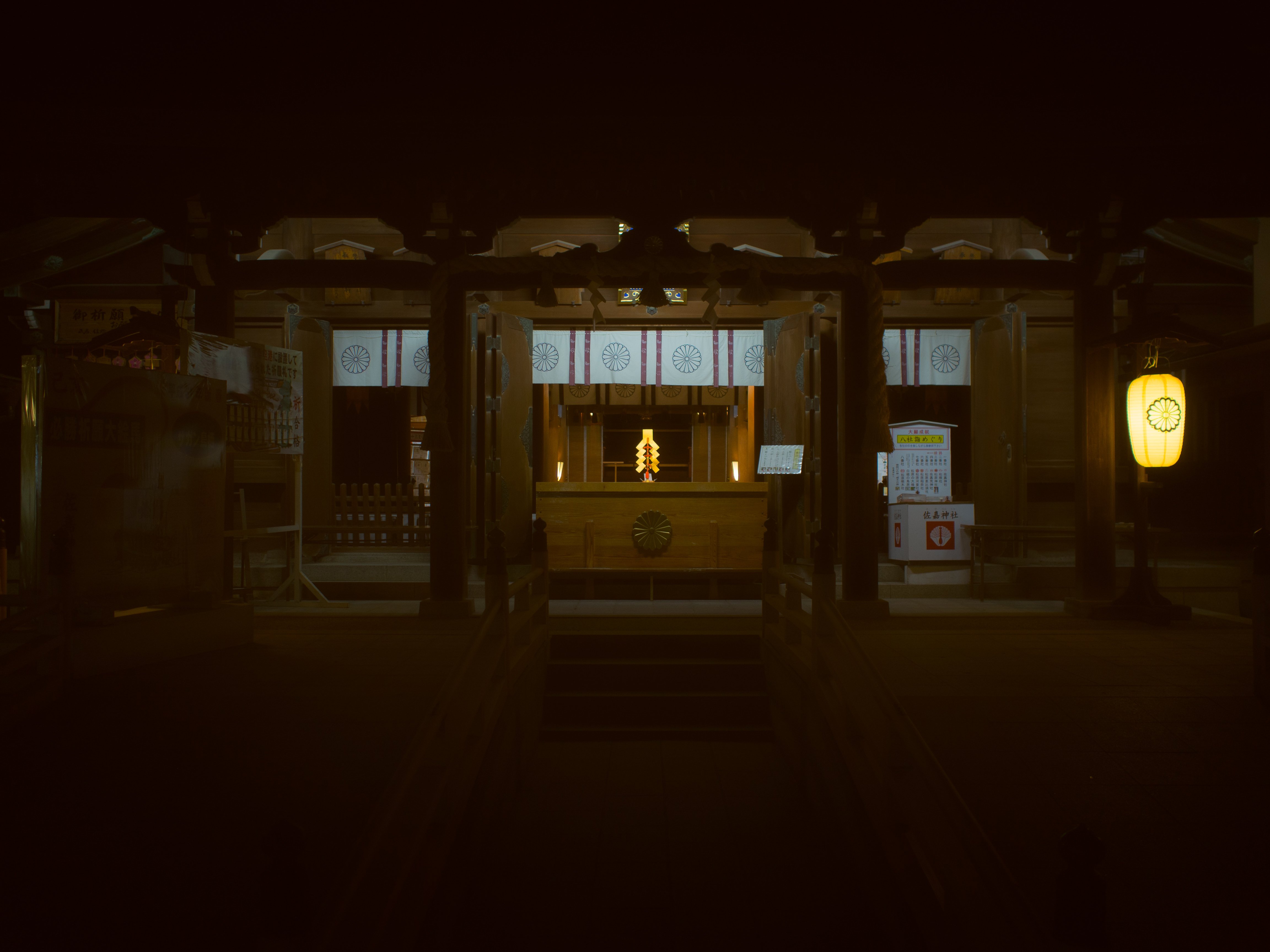 Once I got some light, I discovered another challenge: lighting in public almost never is a neutral white. I’d say the light shining on the red shrine is fairly close to neutral, likely to emphasize the structure’s beautiful red paint. Typically, public lighting has either a strong yellow or green cast. My expectation was that it would be difficult to make attractive photos with different competing colors. However, in post-processing, I decided to lean into the mixed lighting–I cranked up the color saturation and boosted exposure. That created a more iconic, comic book look to the Saga streets. 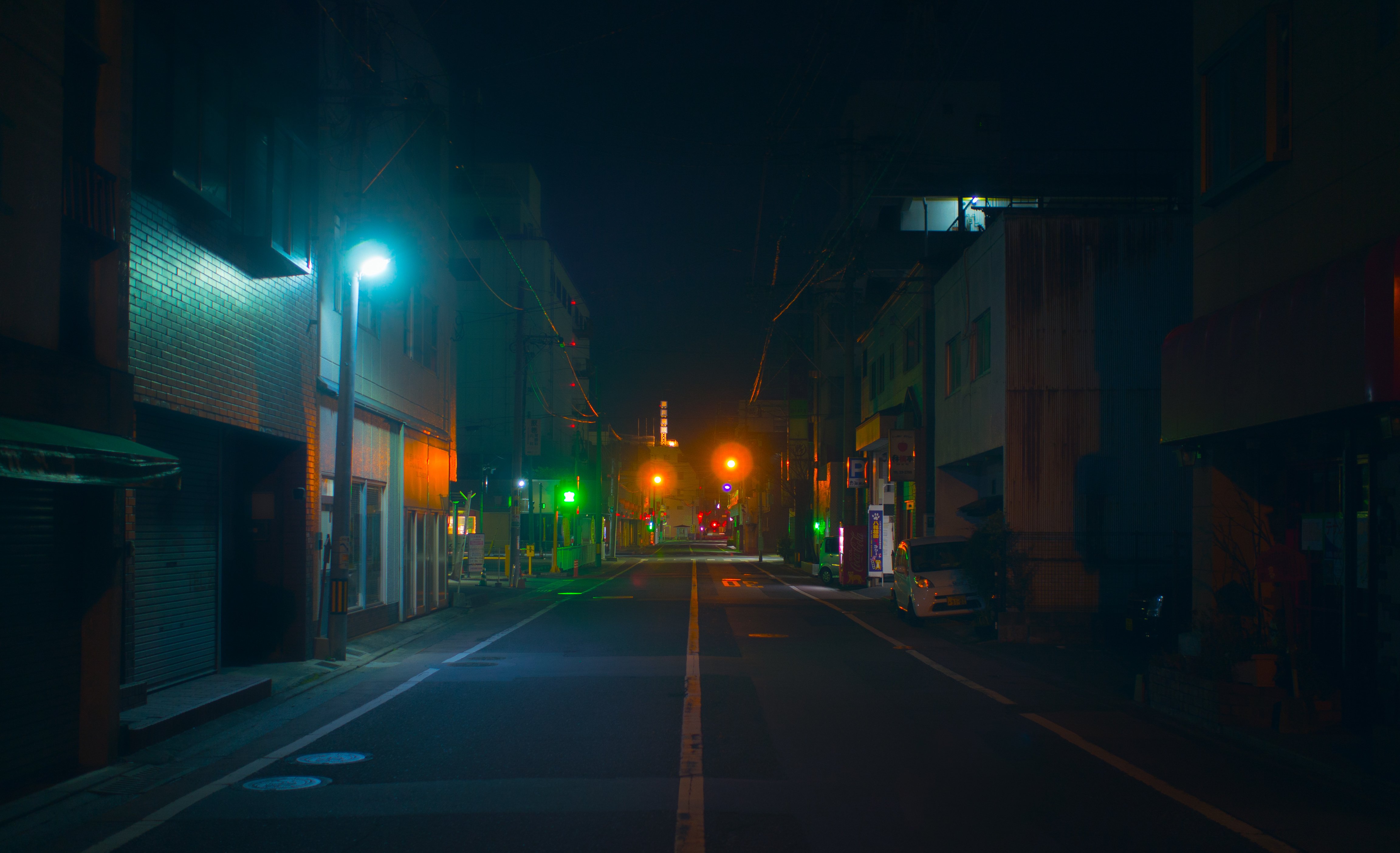 Look at the way the light reflects off of the power lines and manholes. Night-time street lighting creates dramatic, colorful silhouettes. This is a fun style that I’ll try developing a bit more in the future.

From that time on, I becamelaser focused on going to college, studying Japanese, and becoming an English teacher in Japan. In college, I volunteered as an assistant English teacher, taught a deaf girl Japanese, made friends, and continued to build confidence in my abilities. I occasionally had problems with my parents or my sister, but they weren’t so big. Every day was good.

Although I focused on living in Japan, I realized that my parents, especially my mom would have a tough time with me away. We were very close. Their only son was planning to live far away from them. I felt great about my future, but I was worried about theirs.

Then, I got an interesting opportunity that changed things. My Japanese teacher announced that some Japanese students were going to come study at the school for two weeks, and they needed host families. I liked the idea of having time to practice Japanese and learn more about Japanese culture. On top of that, my parents would have the opportunity to learn more about the world I wanted to live in. They thought it sounded interesting, so we became a host family.

We had a great two weeks. Before our first student left, our family started hosting another Japanese student. That student lived with us for three years. Ever since then, my parents have hosted many students, often hosting three or four students at a time. They are recognized as the best host family in the area. Students give referrals to family and friends. My mom can make use of her mothering instincts, and my dad has a regular supply of test subjects for his upcoming international comedy career.

Students from India and China can’t replace a son, but they can keep life interesting.

After my first year in college, I was able to study in Japan for two months. I studied photography, visiting Tokyo regularly as part of the class. I finally had a chance to experience the place that I had fallen in love with. Yet, it was a bit of a mixed bag. I enjoyed Japan and had fun with Japanese students, but it felt like something was missing. That’s not surprising. I wasn’t in love with Japan. I was in love with my idea of Japan. When I came face-to-face with the object of my love, I found out how familiar it was. Of course, Japan is special. Tokyo is a great place. But I expected heaven and I got earth.

Even so, I loved Japan all the same.

For the sake of completeness, I think I should mention an embarrassing moment I had while I was there. A few weeks into my stay, I had a casual conversation with a pretty Japanese girl as part of a group. We talked about things we like, hobbies, etc. We both liked One Piece, that Japanese cartoon I mentioned before. She invited me to talk some more about it later, just the two of us.

Later, we met. I talked about cartoons. Then she left.

The embarrassing part is that I didn’t realize what I had done until a few years ago.

The great thing about Japan is that it isn’t filled with giant fat people. There are handsome dudes and pretty ladies everywhere, with fat people the exception. Living in Japan made me realize I needed to up my game. Nice Japanese ladies don’t want to date the Michelin man, I thought (not yet realizing a girl had been interested in me already).

After returning to the US, I started biking to school. Later, I discovered the ketogenic diet. In a couple of years, I dropped 60 pounds. For the first time, I started taking care of my body.

I chose to quit my job and follow my parents. It was not an easy or happy decision. At first, I didn’t tell my parents I was considering staying in Texas. Then, while my parents and I talked to some stranger, I let slip that I was thinking of staying. It was a shock to both of them. I don’t know what they were thinking, but to me, they seemed surprised that I would consider staying. My mom’s reaction especially affected me.

After moving to Washington with my parents, I tried to find work. However, it was the beginning of the depression that started in 2007, so work was hard to find. I didn’t want to go back to the way things had been before. Since I couldn’t find a job, I decided to do things I knew I could do. I bought some economics, philosophy, and Japanese textbooks, turned on my new favorite band, Dragonforce, and started reading. I hired a Japanese tutor and learned from him for six months, wrote a weekly blog in Japanese, and made Japanese friends.

During this time of transformation, I made the most important and difficult decision of my life. I told my parents that I wasn’t going to practice Judaism anymore. It was a devastating event for them. I knew that it would hurt them deeply when I told them. However, once I had finally started taking responsibility for my life, I knew that I couldn’t simply continue following them. With deep reflection, I realized that Judaism wasn’t for me.

For someone that isn’t religious, it’s probably difficult to understand what my or my parent’s experience was like. They were doing what they thought was best for themselves and me. They were supporting me on a path to a deep understanding of God, humanity, and the mysteries of life. Everything they did for me, everything they taught me, they did because they loved me. And now I was taking all of that and saying, “Thanks, but no thanks,” and walking out the door. I wanted to be a good son, but I was sacrificing too much of myself to become a “good son”. I couldn’t continue; it felt like lying to them and myself.

When I began to follow my own path, the whole world looked different. I felt energized, like a switch had finally been activated inside me. I could finally put my full effort into doing something. For the first time, I felt what it was like to truly have my own will. I felt strong.

I made the decision to become an English teacher in Japan. To do that, I had to go to college. I applied to a local college with Japanese courses.

But, before going to college, I did something unexpected: I took a trip to California to meet a girl. She and I had been language partners online. She was taking a short trip to California, so I decided to drive there by myself. When I told my parents what I was going to do, my dad was ready to give me a list of interesting places to go, but my mom’s first words were, “You’re crazy.” Now, I don’t know where that came from or what it meant, but it sounded like a challenge to me.

I got up one morning, packed the car with crackers and drinks and headed out to San Francisco. When I got to the city, I stopped at a gas station to look for directions to the hostel I planned to stay at. As I was doing something in my car, a homeless man came and asked if I needed help. Being the naïve dude that I was, I asked if he knew where the hostel was. He gave me directions to a place very far from where I remembered it on Google Maps. After I thanked him for helping me, he asked if he could have some money and the crackers. I gave him the loose change in the car, but the crackers were mine.

Eventually, I made it to the hostel. The next morning, I met the girl, a family friend, and a cousin of hers. After a day of driving around, sightseeing and searching for wine, we returned to their hotel for drinks. They asked me what I wanted. “Milk,” I replied. My parents don’t drink (my mom hates alcohol, given that she divorced an alcoholic), so I had no experience with casual drinking. I had small amounts of wine for religious purposes, but I didn’t like it. They were confused by my milk request.

In hindsight, I think that they probably wanted to get me drunk and find out who I “really” was before the family friend and cousin returned to Japan. Who were they going to be leaving that girl with? I don’t know if watching me slam that liter of milk helped reassure them that I wasn’t a serial rapist, but I’m positive it tasted a lot better than whatever filth they were putting in their mouths.

After a nice conversation, my friend walked back with me to my hostel. We said our good nights and then I went to bed. Shortly after, I heard a knock on my door. It was her. She said that she couldn’t find her way back to her hotel. I took her by the hand and led her back. On the way there, we saw a well-dressed couple doing some intense kissing outside another hotel. Like a child, as we passed them, I said in a loud voice, “Did you see that?” That was the beginning of a long tradition of me embarrassing girls in public.

When we got to her hotel, she gave me a hug and looked longingly into my eyes. I promptly told her goodnight and ran away. Yes, I literally ran away. I don’t know why. I was unaware of it then, but I was probably doing a good job of demonstrating that I was just a normal dude.

I’ll save you the details of the rest of that trip, but it was my first real solo adventure into the world of adulthood. My future was growing brighter. I was finally taking on the world.